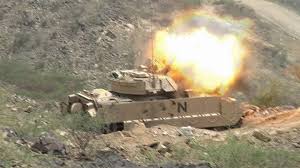 Moreover, the Yemeni army managed to destroy seven military vehicles belonging to Saudi army in several military operations in beyond borders fronts over the past 24 hours.

A military vehicle was destroyed behind Hadad site and another one was destroyed when an n explosive device went off at Sudis site in Najran, the official added.

Meanwhile, the Yemeni army foiled an advancing attempt of Saudi-led coalition militias towards Harad customs, resulting destruction of four military vehicles in addition to destroying military bulldozer with a guided missile at Al-Amoud site in Jizan.