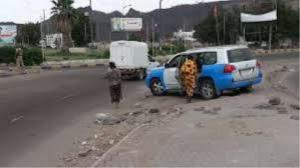 The refugees have been detained for years, including people with AIDS and some others belong to Daesh and al-Qaeda, Director of Refugee Affairs Department and Deportation in Aden, Colonel Khalid Al-Alwani, said.

Al-Alwani said he received a phone call from Hadi’s interior minister Ahmed al-Miseri, directing the halt of the nutrition allocations for refugees, as a means to pressure the department to release them.

He warned of dire consequences that might occur in the city if the orders of al-Miseri were carried out, holding him responsible for any future criminal events.

Directives of Hadi’s interior minister came less than 24 hours after his ministry and security services announced the state of emergency in the city of Aden, warning of terrorist attacks targeting government headquarters and foreign offices.

#BREAKING #NAJRAN: A Saudi military vehicle was destroyed by a guided missile.