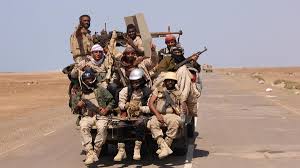 HODEIDAH, Dec. 24 (YPA) – It’s not been more than 24 hours for the crime of raping a child by militants loyal to Saudi-led coalition in Mokha city.

On Sunday, a new crime committed by the militants in Durihami district in Yemen’s Hoeidah province,  murdering a  young man called “Haitham Sagher Abkar” who ran a small restaurant in Mokha city.

Local sources have reported that Haitham Sagher Abkar has asked the gunmen for the price of the lunch they had at his restaurant, but the price cost him his life.

According to the sources, the militants directed their rifles towards Haitham and fired a barrage of bullets, led to his death.

They left the scene of the crime with arrogance, as if they had not committed a heinous murder of a young man in the western coast, one of the sources in Nakhlah area said.

A wave of outrage broke out following the death of Haitham, and people held a protest demanding a trial for the killers of Haitham, and the verdict of death against them.

Within three days, the coalition forces raped a girl in Tuhita district, raped a child in the City of Mockha and on Sunday killed Haitham Abkar, in an atmosphere of protection and impunity provided by the occupation forces to their rapists and killers of the mercenaries.

#Breaking: #Hodeidah – A citizen’s house was burned in coalition…