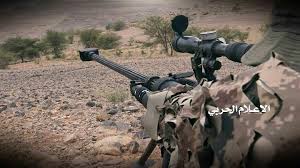 The Yemeni army, during last January, carried out 254 sniping operations, of which 73 were in the border fronts and 183 in the inside fronts, according to statistics of sniping operations spotted by Yemen Press Agency.

In the border fronts:

In the inside fronts:

The army snipers shot dead 89 mercenaries in Marib province, mostly in Serwah front, 23 others in Medi front in Hajjah province, 31 in Jawf province, 21 in Taiz province, 13 in Nehm front of Sanaa province, three in Shabwa province, two in Mokiras district of Bayda province, and one mercenary in Naqil al-Khashaba in Daela province.

#BREAKING: #SAADA – A civilian was killed in a Saudi-led coalition airstrike on Al-Sarbi souk.

#BREAKING: #SAADA – 2 civilians were killed and others injured in a Saudi-led airstrike targeted a civilian’s car in Rubo’a al-Hodod.