Al-Houthi: The US kills and besieges Yemeni people 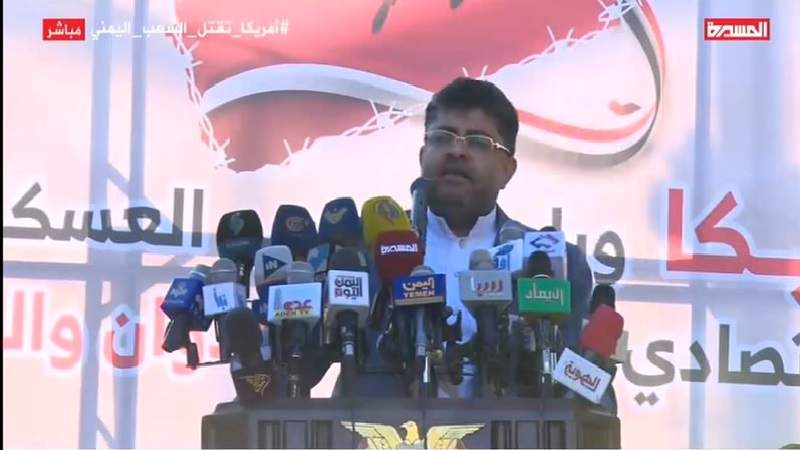 SANAA, Nov. 22 (YPA) – Top member in the supreme political Council, Mohammed Ali Al-Houthi affirmed that “ America was the basis for the aggression and a major partner in the siege against the republic of Yemen.

This came during his speech in the mass rally in the capital Sana’a, titled ‘The US is Behind Military and Economic Conflict and Continuation of War and Siege of Yemen’.

He affirmed that “the US is the one that kills and destroys Yemen,” stressing that Washington will “remain our enemy constantly.”

He mocked Saudi Arabia, saying, “Saudi Arabia can’t even make kites as well as the F15 and F16 warplanes industry.”

Al-Houthi underlined that “America, which claims freedom and democracy, blocks news sites such as Al-Masirah.”

Addressing the aggression countries al-Houthi said: “Why are you preventing our ships from reaching the port of Hodeidah and closing Sana’a Airport, and why are you banning cash transfers?”

Regarding the US decisions regarding Yemen, he said: “Any sanctions you impose do not affect us. We have no apartments in Turkey or Cairo, nor in any other country.”

“The air and sea embargo is affecting all Yemeni citizens. We don’t even ever go out of Yemen. We don’t have anything outside of this country.”

“We do not have companies or funds to stop remittances. It only hurts Yemeni citizens. ”

“The blockade on our country is imposed by US frigates and ships,” he stated. “The Yemeni people do not care about American screams and they are firm in their positions.”

With regard to the dialogues, he revealed the results by saying: “We had conversations and discovered that they are not serious. Their dialogues are only exploratory.”

Twitter campaign organised to highlight US crimes in Yemen