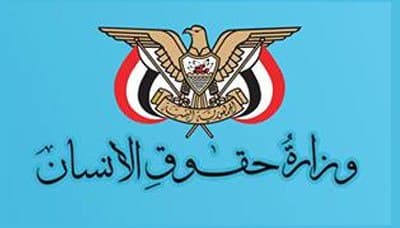 SANAA, Oct. 12 (YPA) – Yemen’s Ministry of Human Rights expressed on Tuesday its regret over the Human Rights Council (HRC)’s abandonment of its humanitarian duties towards the Yemeni people.

The ministry said, in a statement, it followed carefully the course of the meeting of the Human Rights Council in its 48th session, which completely neglected the war crimes and crimes against humanity committed by the coalition of aggression in Yemen.

The statement stressed that the council did not move seriously towards forming an independent international committee to investigate into all violations and crimes have been committed against the Yemeni people since March 2015.

It pointed out that many of the reports issued by the Office of the High Commissioner for Human Rights and its bodies working in the field of monitoring and documenting human rights crimes have ignored a lot of crimes and violations committed against the Yemeni people.

The ministry’s statement affirmed that the ignored crimes by the HRC as Dahyan school bus, Bani Hawat neighborhood, Juma bin Fadhel School, Wahha district in Hajjah, Al-Masloub in Jawf, Al-Falah school in Nihm district of Sanaa, and other crimes.

The ministry referred to the heinous crimes committed by the aggression by targeting population gatherings such as the funeral of the Al-Ruwaishan family in Sanaa, Al-Sanban wedding, a wedding for women in Arhab district of Sanaa and Hodeida, as well as targeting farms, Stores, tankers, food factories, roads, bridges, schools, hospitals, health centers, telecommunications networks, electricity, and others.

It held the United Nations full responsible for its continuous cover towards the crimes of the US-backed Saudi-Emirati aggression in Yemen for nearly 7 years.