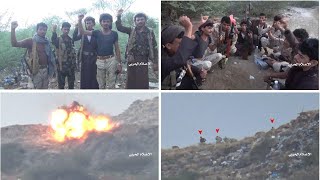 JIZAN, Dec. 31 (YPA) – The Yemeni army, backed by the Popular Committees, has carried out a raid on Saudi and Sudanese military positions in Jizan province, southwestern Saudi Arabia.

The army forces advanced towards the mercenaries’ locations in east of Jabal Jahafan.

The military media has released video footage for the operation, in which the Saudi army mercenaries suffered heavy losses in their ranks during the confrontations.