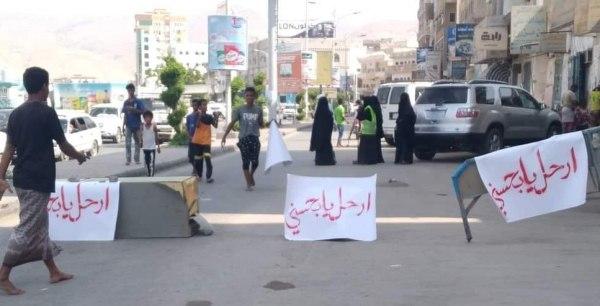 HADRAMOUT, Sep. 15 (YPA) – Dozens of people of Mukalla city, the capital of Hadramout, called for a protest rally on Tuesday to a civil disobedience due to the collapse of the electricity service in the province, according to local sources.

At the rally, the protesters blamed the local authorities the responsibility for rising food prices and the deterioration of the local currency.

The participants raised banners and flags calling for the departure of the UAE-funded governor of Hadramout, Faraj Al-Bahsani, who was summoned by Abu Dhabi last week.

They called on all the people and residents of Hadramout to carry out a comprehensive civil disobedience and to go out to the streets to express their rejection of the continued deterioration of the electricity service and the policy of starvation and torture practiced against the sons of Hadramout for four years.