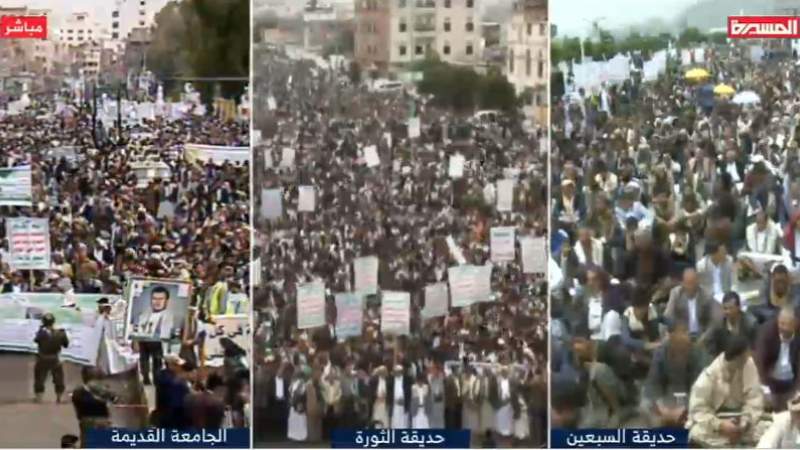 SANAA, Aug. 8 (YPA) – On Saturday morning, the Capital Sanaa and other provinces have witnessed mass rallies in several main squares to celebrate the annual anniversary of “Day of Wilayah”, in which prophet Mohammed (Peace Be Upon Him) Selected Imam Ali ibn Abi Talib as his successor.

Four marches took place in the capital Sanaa, in which thousands of people gathered in the western square of the Thawra Park, the Square in front of the old university gate, and the southern square of the 70th Park, while a mass rally for women held in the square of the People’s Mosque.

The capital’s mayor, Hammoud Obad, welcomed the crowds celebrating and participating in the events, Day of Wilayah, in which the Prophet Mohammed selected (the mandate of the Commander of the Faithful Imam Ali Ibn Abi Talib) as his successor.

The participants declared their allegiance to Allah, the Messenger, to Imam Ali and to the nation of Huda (peace be upon them), chanting the slogans of freedom rejecting hegemony of the devil forces the forces in the world, led by America and the Zionist entity.

They emphasized that they would follow the imam Ali’s approach and learning lessons from his jihadi biography, courage and heroism in the face of tyrants and oppressors.

Eid al-Ghadeer marks the occasion on which the Prophet Muhammad publicly proclaimed Ali as his successor as leader of the Islamic Ummah. The day is celebrated by Muslims around the world.