SANAA, July 20 (YPA) – The suffering of the Yemeni person is exacerbating day after day due to dangerous deviations that affected the work of the United Nations organizations and the other international organizations operating in the country.

Since the start of the war of the Saudi-led coalition countries on Yemen, the legal aspect has been absent from the scene of events in the country, and has not conveyed the grievance of the Yemeni people and the genocide crimes they are exposed to whether by bombing or by starvation and economic war.

In return, the organizations working in the relief field have appeared and began to multiply, without any significant benefit from their existence in changing the living conditions of the people of Yemen.

Recently, the United Nations said that Yemen is the most country in the world suffering from the largest food and humanitarian crisis.

In a joint report with the Food and Agriculture Organization of the United Nations (FAO), the organization warned of a famine that could rise to devastating levels in 25 countries in the coming months due to the impact of the Covid-19 pandemic, including Yemen.

The report stated that Yemen remains the most country in the world suffering from the largest food and humanitarian crisis, as evidenced by the fact that about 15.9 million people in Yemen (53% of the population) face food insecurity in December 2018.

Analyzes released in July 2019 showed 1.2 million people in a number of Yemeni governorates were facing severe food insecurity during the period between July and September, according to the organization.

In December 2019, Asif Bhutto, Director of the World Food Program (WFP) in Yemen, said that the program “spends eight billion dollars annually” for the value of food and medical assistance provided by the program to 12 million people in Yemen.

But despite these astronomical numbers that the United Nations is talking about, they did not tackle hunger. The Yemeni citizen did not receive any of these funds except food aid, mostly expired and rotten, something that has been officially documented by the competent authorities in several districts in the provinces managed by the Supreme Political Council, in addition to the areas under the control of the coalition. 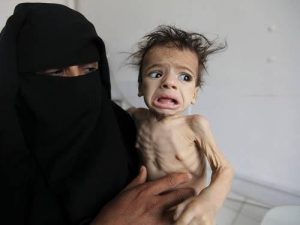 Observers believe that the United Nations organization and its affiliates are only trading with the blood of the Yemenis to achieve financial profits for its employees.

They indicated to documents revealed by the Supreme Council for Management and Coordination of Humanitarian Affairs about the budget of one of the organizations, which proved one of the scandals for organizations in its operating budget that allocated approximately 65% for salaries and petty cash, while only 35% was distributed to citizens.

They emphasized that the huge annual budgets of the organizations are evidence of their trade in peoples by turning into tools of war away from humanity, for the money they earn.

Al-Barakani turns against Hadi in Taiz