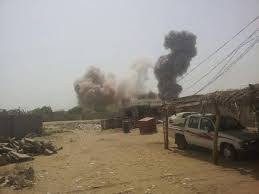 According to the official, the forces of aggression committed 80 breaches, included flying four spy aircraft over the sky of 50 Street and Hays district.

The official added that the violations also included 35 breaches by firing with 90 artillery shells and 48 breaches by gunfire.

Furthermore, the official indicated that two civilian homes were burned down as a result of artillery shelling launched by the aggression forces on the besieged city of Durayhimi.

Meanwhile, the coalition air forces launched two airstrikes against the districts of Kitaf and Dhaher in Saada province, and another airstrike on al-Mazhad junction in Harf Sufyan district of Amran province, northern Yemen.

The enemy aircraft also carried out four raids on the Hiran district and a raid on Haradh district in Hajjah province, while 18 raids hit the Majzar district in Marib province.

According to the official, the coalition aircraft waged several airstrikes on a number of directorates in Bayda province, including a raid next to the health isolation center in the Affar Customs.

The official added that ten airstrikes on the districts of Qaniyah and al-Sawadiyah, while eight others hit Dhi Na’im, Nati’ and Radman districts.

Palestinian wounded, another arrested by Israeli forces in al-Quds