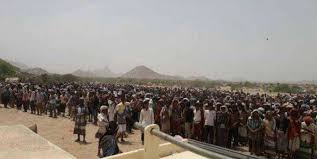 According to the sources, two powerful explosions rocked the city as result of missile attack on the Al-Majid camp, which is led by Saleh al-Shajari, from the highest mountain of Thra’a overlooking the city.

More than 30 soldiers were killed and wounded Tuesday night in the attack that targeted al-Amajd camp, east of the town of Lawder.

No party has claimed the responsibility the attack so far.

Violent clashes break out between coalition gangs in Taiz

Coronavirus deaths rise to 1,113 in China