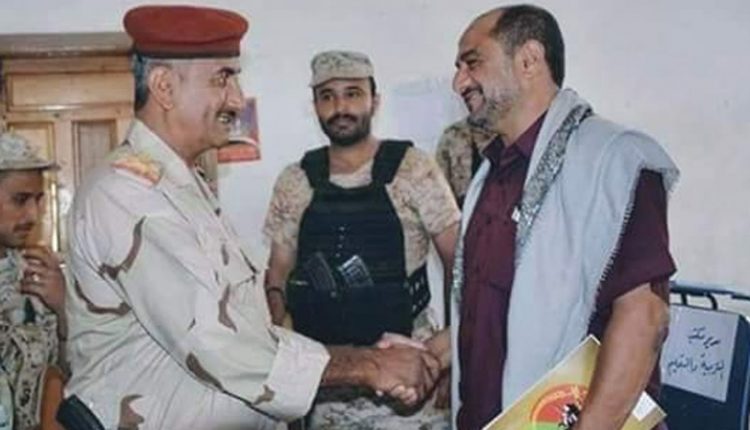 SANAA, Dec. 11 (YPA) – In a recent report, the UAE-based “Al Arab” Newspaper revealed that al-Islah ( Yemeni Branch of Muslim brotherhood)  was involved in the killing of Brigadier General al-Hammadi, commander of the 35th Armored Brigade in Taiz last week.

The newspaper reported that there was a major conspiracy that overthrew the Brigadier General, according to leaked information from the preliminary investigations into the assassination of al-Hammadi

According to its sources, al-Hammadi’s brother Jalal and the executor of the agent admitted that the leader of the Islah party and his nickname al-Ahdal were the ones who instigated them to carry out the killing, which caused a sensation in Taiz.

The report continued to recount some of the leaks by saying that al-Hammadi’s brother has met with al-Hadal twice in a row in al-Hasb area west of Taiz city in a hotel and during the meeting the assassination was planned.

It noted that the meetings between Jalal al-Hammadi and Al-Aim were at the end of November.

Jalal al-Hammadi admitted that he received a large financial reward for the operation amounting to 50 million riyals.

In the report, the newspaper said that it had found a letter sent from one of the participants in the crime, Mustafa Abdul Qader, which arrived at al-Ahdal’s phone after the assassination, which contained only one word: “Done”.

It is worthy mentioning  noted that the commission investigating the assassination is the one set up by the so-called 35th Armored Brigade, while a commission of inquiry appointed by outgoing Abed Rabbo Mansour Hadi still not start the probe.

The commission consists of figures loyal to the Islah party, while sources have not ruled out that the Islah is the one who forms this committee in the behalf of Hadi.

According to sources in Taiz, the committee set up by Hadi to investigate al-Hammadi’s assassination arrived Tuesday in the city of Taiz to investigate the incident.

“Rights Radar” accuses UAE of carrying out assassinations in Aden