WHO: 18 million Yemenis live in areas at risk of malaria 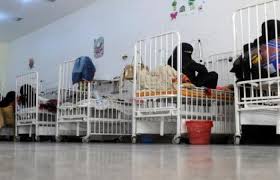 SANAA, Dec, 2 (YPA) – The World Health Organisation (WHO) revealed on Sunday evening that 18 million Yemenis live in areas at risk of malaria, while 10.8 million live in high-risk areas.

“In 2018 and 2019, our efforts continued to strengthen malaria control interventions and avoid potential setbacks with the support of partners such as the World Bank and Kuwait.

In recent weeks, WHO has launched a spraying campaign to control mosquitoes carrying malaria and viral fevers in 59 districts across eight Yemeni provinces.

According to the organisation, the campaign aims to protect 1.5 million Yemenis and 265,763 homes through field teams of 2,052 workers.

The country’s five-year war has destroyed or halted half of the country’s health facilities, while some 20 million Yemenis needing healthcare, according to the United Nations.

A number of Yemeni provinces are witnessing a wide spread of epidemics and viral fevers, leaving hundreds of dead and thousands infected.