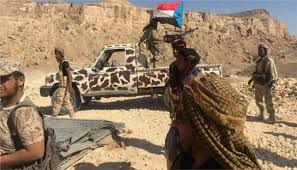 According to the sources, the gunmen killed the soldier Majid al-Omari Belobeid in Bayhan district.

On Thursday, a citizen was killed and several others were injured by Hadi forces during the suppression of a protesting demonstration by the people of the occupied Shabwah province.

A citizen named Saeed Mohammed al-Qumeishi was shot dead by Islah Party militia affiliated to Hadi’s forces, who shot at demonstrators in Azzan city in Shabwa, according to sources.

A number of the demonstrators, who demanded the departure of “Hadi” forces from the city, were injured during the protest, the sources added.

#Breaking: #Yemeni army launches an offensive on sites of #Saudi-led coalition in #Jawf