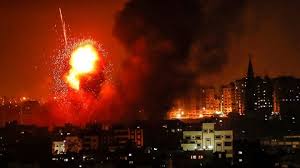 According to “Palestine Now”, the Israeli occupation planes targeted the al-Tal site west of Deir al-Balah in the center of the Strip, and targeted an empty land east of Khan Younis.

The shelling came a few hours after the Israeli army claimed that Hamas fire rockets from the Gaza Strip at nearby Israeli towns.