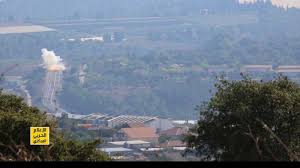 The video showed the moments when the a Knornet missile hit the Israeli military vehicle in the road of the Avivim barracks, killing and injuring all crew members.

On Sunday, Hezbollah in an issued statement , said that “at 4:15 P.M. on Sunday, September 1, 2019, supporters of Martyrs Hassan Zbib and Yasser Daher destroyed an Israeli enemy military vehicle at the road of the Avivim barracks (occupied northern Palestine), which resulted in the killing and injuring of those in it.”