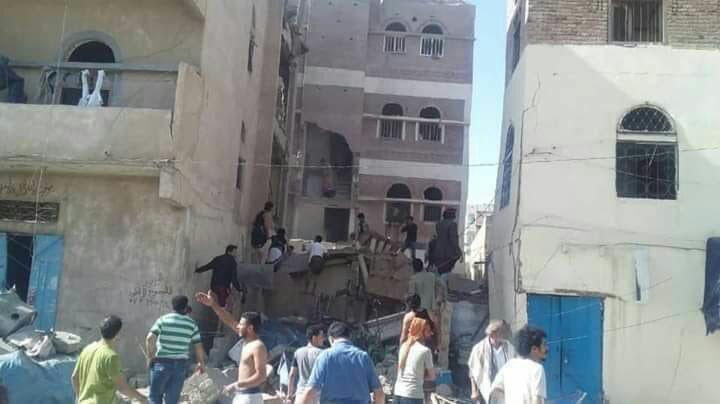 SANAA, May 16 (YPA) -The Yemeni Media Union condemned the attack that was carried out by the coalition of aggression against the House of the President of the Media Union Abdullah Sabri in the capital Sana’a on Rabat Street, during an air raid on Thursday morning.

The direct and treacherous targeting resulted in the wounding of Abdullah Sabri with multiple wounds and fractures, as well the death of one of his children, whose body is still missing under the debris, the Union said.

The Media Union considered the attack against the head of the Yemeni Media Union’s home, which is a civilian target, to be a serious and disturbing escalation contrary to the concepts and principles of international law criminalizing the targeting of media professionals and civilian neighbourhoods.

The Union expressed its concern that this targeting is a prelude to the further perpetration of crimes against Yemeni civilians.

The statement called on the relevant international organizations to take a clear stand against the silencing of independent media by the imperialist forces.

The Union furthermore strongly condemned the heinous crimes committed by the Saudi-led aggression air forces against residential neighborhoods in the capital Sana’a, during which more than 52 people were killed and wounded, while several others are still missing under the debris.

The YMU called on international human rights organizations to raise awareness to the danger thag the Yemeni people are suffering from due to tge crimes of the invaders.

In this context, the Yemeni Media Union further called on the national media of Yemen to raise their voices in the face of the aggression and assume its national responsibilities at this moment of distinction, and to not succumb to the intimidation by the coalition of aggression but to continue to expose its crimes to the world.

“In conclusion, we pray for mercy on the souls of the martyrs, and we pray for the wounded to heal and for the victory of our oppressed Yemeni people. Shame on the aggressors,” the statement concluded.

Calls for new marches in Sudan after suspension negotiations