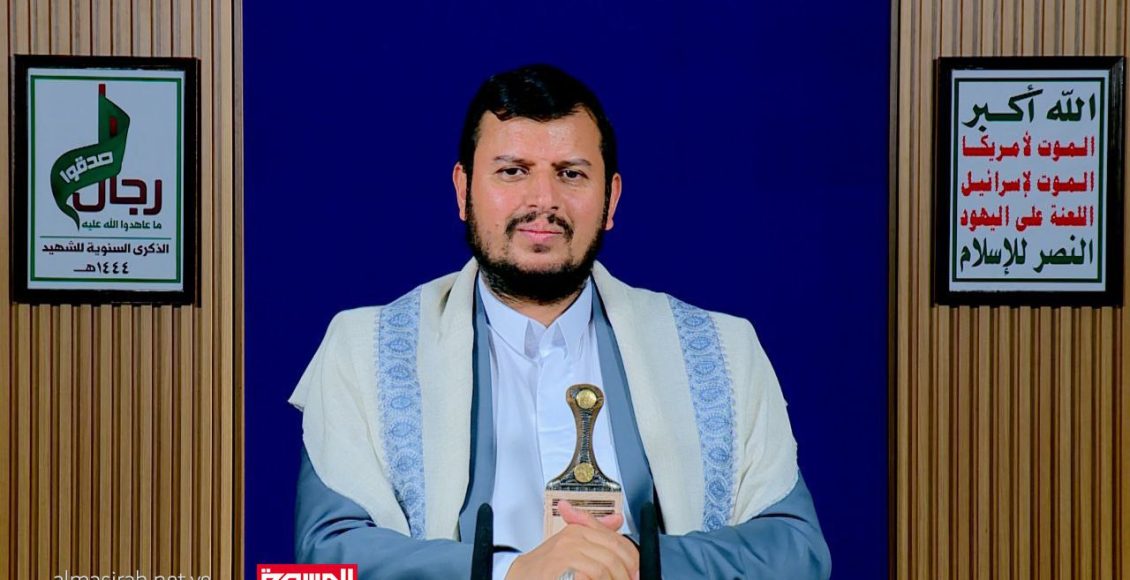 SANAA, Dec. 08 (YPA) – The leader of the revolution, Sayyed Abdul-Malik  al-Houthi, stressed on Wednesday the importance of establishing the correct concept of martyrdom for the sake of Allah and its role in reviving the nation and steadfastness on the right stance.

In his speech on the anniversary of the martyr 1444 AH, the Leader of the Revolution addressed greetings, honor and appreciation to all the relatives of the martyrs, pointing out that this anniversary is a station for providing determination, insight, awareness and many lessons.

Sayyed Abdul-Malik explained that human societies glorify the sacrifices of those who contributed to their major causes and those who sacrificed for their principles and crucial issues and for their freedom and independence, and this is an innate thing in the reality of human beings in general.

He also affirmed that the Yemeni people are at the forefront of the people of the nation in terms of their level of steadfastness, sacrifices and giving that they are not subject to weakness or submissiveness.

The leader pointed out that it is important on this anniversary to recall the responsibility towards the families of the martyrs and to praise them, their generosity, patience, steadfastness, and honorable stances.

He said, “Some of the discouraged, lethargic, desperate, defeated, and enemies are also trying to present a false picture of martyrdom and its concept, portraying it as a loss, trying by that to slander the nation and weaken its resolve and weaken its strength and will.”

Sayyed Abdul-Malik stated that the martyrs are a great school in which values, morals and principles were embodied at the highest level by recalling their lives and talking about them and how their giving, spirituality and morals were, and the efforts they made that left a great impact on the youth of the nation and society in general to encourage sacrifice and giving.

He  also urged benefiting from the School of Martyrs, as it addresses all cases of selfishness, despair, impotence, frustration, narrow-mindedness and weakness, revives the spirituality of faith and jihad, and inspires determination and hope.

Sayyed Abdul-Malik stressed that loyalty to the martyrs is everyone’s responsibility, through steadfastness in the right stance and adherence to the great and sacred goals, indicating that the martyrs won and passed the test stage, and in the long road some people may change their positions and become personal goals.

He praised the establishment of the General Authority for the Care of Martyrs’ Families, expressing the hope that all official bodies would cooperate with it, and that the official and popular side would cooperate in caring for the families of martyrs in all fields, financially, educationally, socially and in all aspects.

At the end of his speech, the Leader of the Revolution reaffirmed the need to pay attention and take care of the activities and programs of the anniversary and benefit from them.

Fire breaks out at Al-Mualla port in Aden