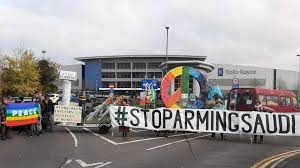 WORLD, Dec. 07 (YPA) – Peace and environmental campaigners staged a demonstration, calling for an end to companies in north Bristol supplying weapons for the conflict in Yemen, Bristol24-7 Website Reported,

Dubbed a ‘Tour of Shame’, activists from XR Peace Bristol and Bristol Against Arms Trade confronted arms companies they said are responsible in manufacturing of weapons used by Saudi Arabia against civilians in the Yemen. They demanded the government to “end its complicity in the war on Yemen” with the hope of raising awareness about arms companies in the city “fuelling the war on Yemen,”according to the website

The tour, which visited six arms factories, was led by two trailers carrying a giant peace logo and an ‘arms to renewables’ sculpture.

Companies targeted were Thales and Leonardo in Stoke Gifford, BAE Systems and MBDA in Filton, Airbus on Gloucester Road North and Rolls-Royce in Patchway, involved in the design and manufacture of components for missiles and fighter jets used in conflicts across the world.

It was part of a nationwide day of action organised by Campaign Against Arms Trade (CAAT) which estimates the British government had sold at least £23b worth of arms to Saudi Arabia since the Gulf state launched its bombing campaign on its neighbour eight years ago.

“People have been taking to the streets to illuminate what is often unspoken and unknown – that war starts on our doorstep, that arms companies fuelling the war on Yemen, and elsewhere, are here in our communities, and that the UK government is allowing these companies to make billions from arms sales despite the devastating human cost.”

The conflict in Yemen has claimed the lives of hundreds of thousands of people and triggered one of the world’s worst humanitarian crises.