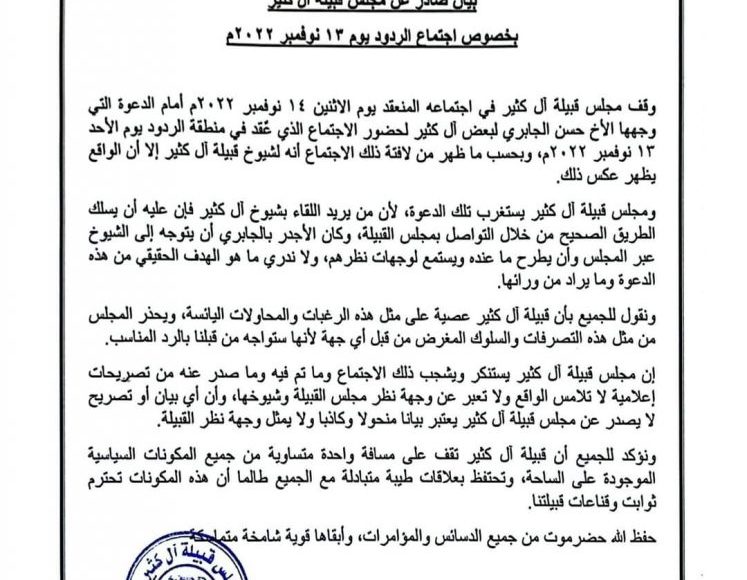 HADRAMOUT, Nov. 16 (YPA) – The UAE has been able to forge unity among the tribes of the oil-producing Hadramout, by financing its affiliated formations in the province.

The Hadramout tribes divided between supporters and opponents of the calls launched by the UAE-funded “Hadrami Uprising” to expel the brigades of the Islah Party-run First Military Region, which has been present for 25 years in the districts of Wadi Hadramout.

Al-Kathir Tribes Council denounced the intrusion of the tribe’s name in the meeting called for by the head of the Uprising, Hassan Al-Jabri, last Sunday in Al-Rudoud area, while Al-Kathir tribes support his calls that aim at spreading chaos and splitting the Hadhrami ranks.

The council said in a statement on Tuesday the meeting of Al-Jabri in the responses in the name of the tribe did not touch reality and did not express the point of view of the tribe council and its elders, noting that any statement not issued by the Al Katheer Tribe Council being considered a distorted and false.

The statement warned the “Hadrami Uprising” to respond appropriately as a result of these actions and the tendentious behavior issued by Uprising’s leader.

The UAE is seeking to control the oil districts of Wadi after its control of the coastal districts and the use of Al-Rayyan airport as a joint military base with the American and British forces since 2016, and its control of Al-Dhaba oil port in the same year, amid the continuation of American, British and French interest in the looting of Yemeni crude oil since 2016.

The Saudi forces took the city of Seiyun, the capital of Wadi Hadramout districts, as their headquarters, along with the Islah militants.

The while announced by the UAE-backed Southern Transitional Council (STC) on October 14 ended, to leave the Islah militants from the districts of the Wadi, without any steps being taken, with Saudi Arabia continuing to detain the STC’s head, Aidarous Al-Zubaidi, and a number of members of the Saudi-formed Presidential Council, headed by Al-Alimi, as well as the governor of Marib, Sultan Al-Arada, in Riyadh since Khalid bin Salman took over as Minister of Defense in early October.

Statistics of 2,800 days of aggression against Yemen released