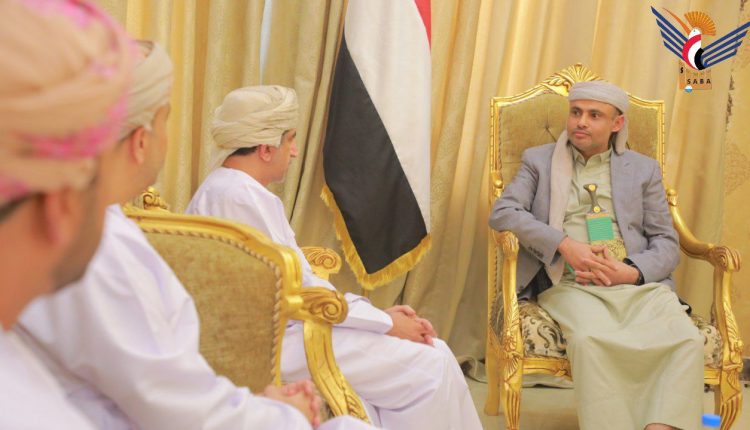 SANAA, Aug.01 (YPA) – President of the Supreme Political Council, Mahdi Al-Mashat, met on Sunday in the capital, Sanaa, with the delegation of the Sultanate of Oman.

During the meeting, President Al-Mashat welcomed the delegation, praising the continuous positive efforts of the Sultanate in alleviating the suffering of the Yemeni people and supporting efforts to establish peace in Yemen.

Al-Mashat reiterated the keenness of Yemen to achieve a just peace that would achieve the right of the Yemeni people to sovereignty and independence, pointing out the need for any truce to be accompanied by a tangible improvement of the economic and humanitarian situation of the Yemeni people.

Mr. President pointed out that the demands of the Yemeni people represented in stopping the aggression and lifting the siege on Yemen, starting with the complete and immediate opening of Sanaa International Airport, Hodeida port of, and the payment of salaries to all employees of the Republic of Yemen from oil and gas revenues that would contribute significantly to alleviating the suffering of citizens.

The meeting discussed issues related to the armistice and the proposals put forward by the UN envoy to Yemen, Hans Grundberg, to the Sanaa national delegation, as well as proposals related to addressing humanitarian and economic issues.

He stressed the importance of the US-led aggression coalition’s involvement in supportive measures to build confidence and the requirements of peace, considering that their adherence to the siege a war crime against humanity and peace.