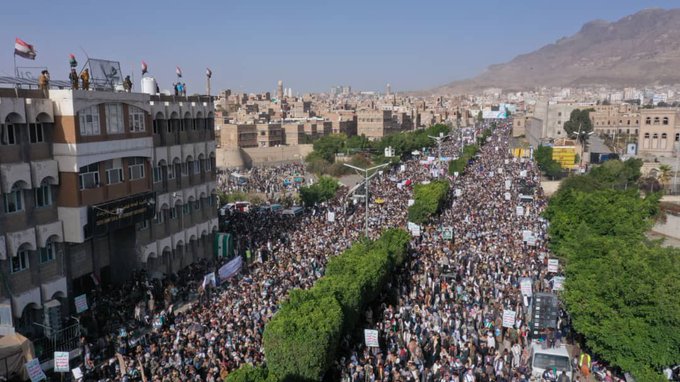 SANAA, March 26 (YPA) – A massive demonstrations was organized on Saturday in the capital Sanaa marking the 8th anniversary of the National Day of Steadfastness in the face of the Saudi-led aggression coalition on Yemen.

In the rally, thousands of participants confirmed, in a statement, that the Yemeni people coming in the eighth year with strength to deter the aggressive coalition and plots and its siege imposed on the Yemeni people.

The protesters appreciated the military operations carried out by the Yemeni army and popular forces against the Saudi depths to break the siege on Yemen, stressing that these operations are a legitimate and guaranteed right of the Yemeni people in the face of aggression and the siege of the coalition.

They called on the free citizens in the occupied provinces and regions to move to liberate every inch of Yemen and to expel the occupation, invaders and to defeat its tools.

“If the coalition wants to get out of the impasse, it must stop the aggression, lift the siege and end the occupation from every inch of Yemen,” the statement added.

It affirmed Yemen’s initial position towards the nation’s issues, foremost of which is the Palestinian cause, noting that Yemen is on the covenant and promise and on the side of the Palestinian resistance.

Meanwhile, Mufti of Yemen, Shams Al-Din Sharaf Al-Din, confirmed that the steadfastness of the Yemeni people in the face of the coalition for seven years is reaping its fruits today, glory, victory and its freedom.

The rally appreciated the military operation launched by the Yemeni army and popular forces in the Saudi depth to deter the aggression and to break the siege on Yemen, calling for more mobilization and support of the fronts with fighters.

Iran adorns its historical monuments with pictures of Ansarullah’s leaders