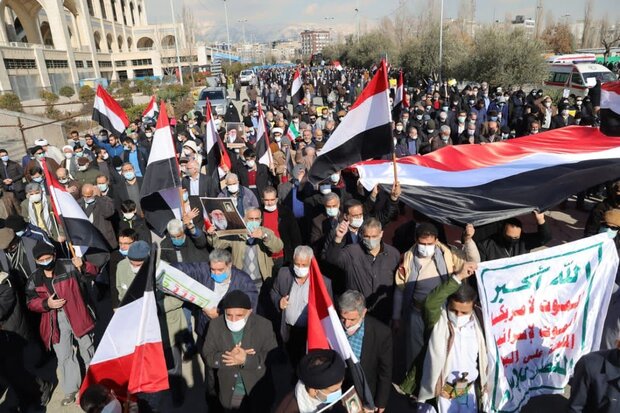 TEHRAN, Jan. 29 (YPA) – Iranians held mass rallies on Friday, in support of Yemen, condemning the inhumane acts of the Saudi-led coalition against the oppressed Yemeni people.

The protesters strongly condemned the recent escalation the Saudi-led coalition’s airstrikes on Yemen.

They expressed their anger over the massacre of Yemeni people during the past seven years of war and chanted slogans against Saudi Arabia and the major sponsors of its deadly military campaign, including the US, Britain, and Israel.

The protesters also slammed the silence of the international community and the so-called advocates of human rights in the face of the ongoing crimes in Yemen, saying the humanitarian crisis in Yemen must be stopped immediately.

A day earlier, hundreds of Iranian students rallied outside the United Nations office in Tehran to protest against the ongoing Saudi aggression against Yemen.