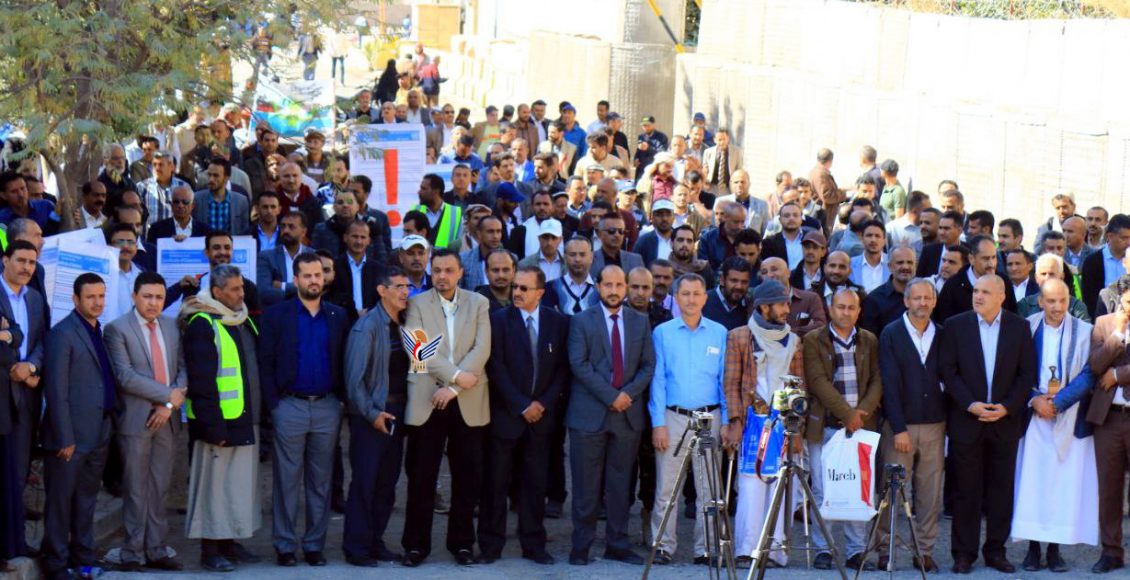 SANAA, Jan. 11 (YPA) – Yemeni Petroleum Company (YPC) employees organized on Tuesday a protest sit-in in front of the office of the UN envoy in Sanaa to denounce the continued detention of fuel ships by the US-backed Saudi-led coalition.

In a statement issued at the sit-in, the company’s staff held the United Nations and its officials fully responsible for the aggravation of the humanitarian catastrophe and the deterioration of the living conditions of the Yemeni people as a result of the cessation of supplying the electricity, water and health sectors with the necessary fuel for their operation, which led to a doubling of the number of deaths in hospitals.

They denounced the escalation of the coalition and its perpetration of crimes against civilians, and civil facilities, the latest of which was bombing the company’s aircraft catering department at Sanaa International Airport and targeting the vicinity of the company’s station in Baihan city, which killed two employees and injured four others while they were performing their work.

In their statement, the company’s employees called on the free people of the world to stand by the grievances of the Yemeni people and to put pressure on the American regime to stop the piracy and lift the siege on the port of Hodeida and stop targeting the civil and service sectors, especially the petroleum company.

The statement pointed out the coalition’s crimes and its threats with targeting the port of Hodeida reflect the extent of the coalition’s disregard for the Charter of the United Nations and its laws aimed at maintaining international peace and security, the statement said.

The coalition forces committed the crime of piracy on the ships carrying fuel, food, and medicine destined for the port of Hodeida, despite being inspected by the UN Verification and Inspection Committee in Djibouti and obtaining licenses, the statement added.

Citizen killed, another injured due to Saudi-led airstrikes on Marib