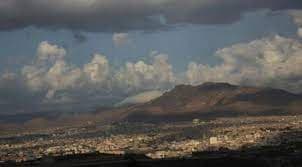 SANAA, Jan. 11 (YPA) – The National Center of Meteorology (NCM) affirmed that the continuation of cold weather in mountainous provinces and desert areas during the next 24 hours.

The center stated, in its weather bulletin, that the weather will be expected to be cold during the night and early morning in the provinces of Saada, Amran, Sanaa, Dhamar, Bayda Taiz, Lahj, Ibb, Abyan, Hajjah, Mahweet, Rayma and Dhalea, as well as to the desert areas.

The center called on citizens to take the necessary precautions to prevent cold shocks,calling on motorists to drive carefully due to low visibility as a result of the formation of fog.