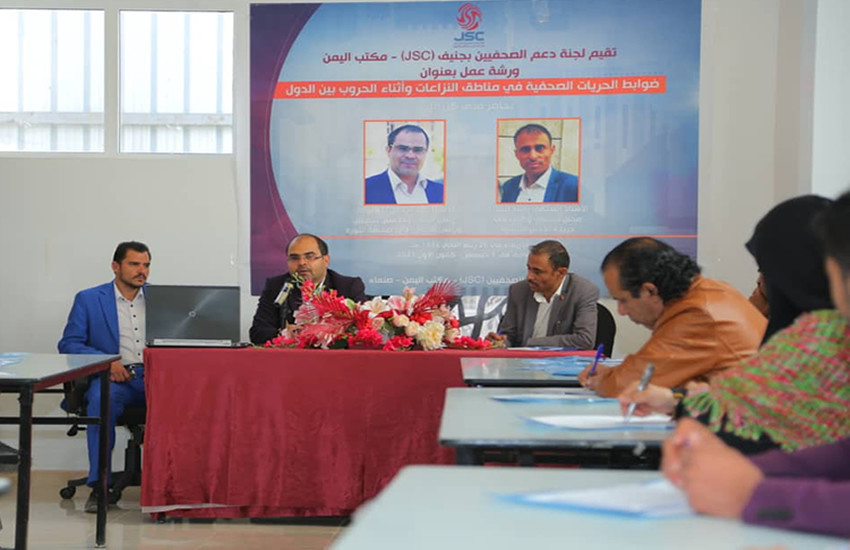 SANAA, Dec. 02 (YPA) – i(JSC) in Geneva has on Wednesday organized a workshop through its office in Yemen on Wednesday, entitled “Controls of press freedoms in conflict zones and during inter-state wars”.

Yahya al-Sharafi, the representative of the JSC in Yemen, said the workshop targeted editorial policy officials of media and journalist organizations in the capital Sana’a with the aim of raising awareness among journalists while carrying out their press activities that discuss internal affairs’ issues that may contravene with press freedoms and copyright.

He underlined that the core work of the JSC to support Journalists in Switzerland (JSC) and through its office in Yemen, it is to defend freedom of expression and media workers, especially journalists who represent the eyes and ears of communities and peoples in their countries.

“Part of the press workers in Yemen may sometimes overlook, in varying proportions, the rules, basics and principles of journalism that are compatible with the media regulations and legislation in force in Yemen, so, the role of the JSC is to make them aware of these rules and principles,” he said.

He stressed that the recall of these controls and legislation is becoming increasingly important in this period due to the state of war in Yemen with an external enemy.

“The situation requires the JSC to educate journalists – especially media and editorial policy officials in press institutions – and to provide them with rules and information to avoid any legal problems during their media coverage and press activities, because of the incompatibility of the principles, freedom of the press or freedom of the media with the controls and standards. Today’s priority is to operate and to inform journalists because the country is in a state of war and faces an external enemy,” he explained.

Al-Sahrafi pointed out that the standards of journalism and freedom control in time of peace differed from the state of war, especially during inter – state wars, a country has been subjected to an aggression from another country, as in Yemen.

For his part, Abdel-Rahman Al-Ahnoumi, Head of Yemeni Media Union and Chairman of the Board of Directors of Al-Thawra Foundation for Press, Printing and Publishing praised the JSC’s efforts through providing support to the press community as a whole, including securing their work and protecting them from any violations they might be subjected to for their press activities.

“The SJC must make the journalist aware of any legal accountability that might cause him or her any problems or difficulties limiting his or her job,” he said.

Al-Ahnoumi stressed the importance of bringing to the attention of journalists and editorial officials of press and media institutions, the standards and controls that must be observed in the course of press work in the event that a country is subjected to external aggression.

“There are criteria and controls to be observed during journalism in the event that a country is subjected to external aggression, which is to know what should and should not be published or talked about and whether this case or the one that the journalist seeks to publish may serve the public interest or serve the enemy,” he explained .

At the workshop, Rachid al-Haddad, a writer and political analyst reviewed the most prominent standards of journalism during wars, and the difference between the controls of press freedoms in the case of peace and in the event of an external aggression or internal war.

He referred to the procedures that journalists should follow in the event of any problems, difficulties or violations due to the exercise of their activities.

#Breaking: #Leader of the revolution, #Sayyed_Abdul_Malik Al-Houthi to deliver a speech at 4:30 pm (Sanaa time) during a mass wedding celebration in #Sanaa