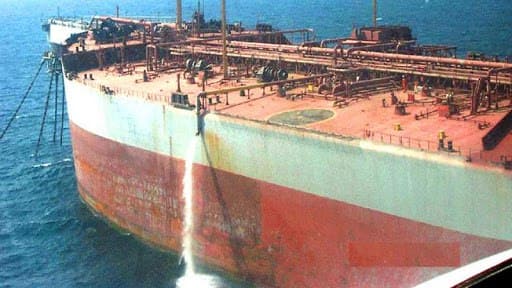 SANAA, Oct. 24 (YPA) – Head of the supervisory committee for implementation of the Safer agreement in Sanaa, Ibrahim al-Siraji, said on Sunday the Saudi-led coalition had explicit intentions to harm the Safer oil ship.

Al-Siraji affirmed in a news statement that the coalition took strict actions to prevented diesel from the access to the ship and provide periodic maintenance, as well as stopping the ship’s operation.

He pointed out that the situation which the Safer ship arrived was a deliberate act by the coalition, which imposed a siege on the ship, with the knowledge of the UN Security Council,” adding that there are documents will prove this.

“The statements issued by the United Nations have revealed many confirmed contradictions due to the lack of the UN’s intention to maintain the ship,” Al-Siraji explained.

He pointed out that the UN drafted the details of the agreement for the initial maintenance and evaluation of the ship, but it had failed to implement the agreement during 30 days.

“We were waiting for the United Nations to present a chronic implementation schedule that accommodates the agreed work in thirty days, and were surprised that its plan excluded nearly 90% of the agreed maintenance work,” Al-Siraji went on to say.

He indicated that the UN plan excluded the agreed examination work as a professional examination based on well-known international standards and replaced it with a visual checkup.