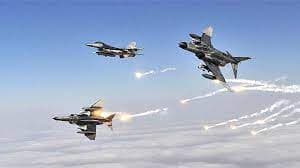 The official said the combat jets waged targeted Marib province with 6 strikes, including 5 raids on Rahba district, and one raid on Serwah district.

Meanwhile, the coalition warplanes launched two strikes on Al-Fara area of Ketaf district of Saada, and another one on Nata district of Bayda province.

On Saturday, the coalition warplanes launched 13 strikes on various areas of Marib.