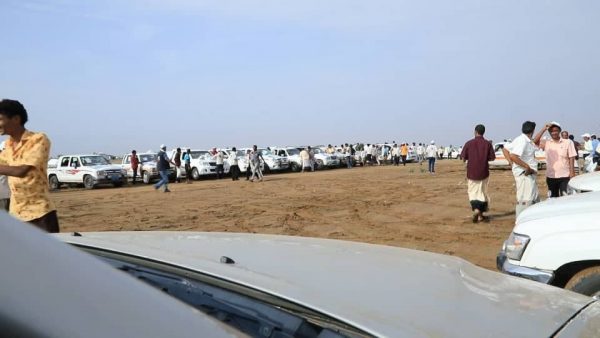 The fever broke out and shivered in the body of Khaled Saeed, 45, from Hodeidah governorate in southwestern Yemen, to prevent him from going fishing, which is the profession that his family relies on.

“I thought it was a seasonal fever that might go away within a day or two, but the medical tests proved that I had contracted malaria that almost killed my life,” Khaled said.

Khaled described the symptoms of his illness, such as headache and severe pain in the muscles and joints, as “unbearable pain”.

The western coast son went to the Public Al-Thawra Hospital, located in the center of Hodeidah. Although approximately 600 meters is the distance between the hospital and Khaled’s house, the disease weakened his ability to walk.
“The distance was long and I did not think at that time that I would reach the doctors due to the severity of the pain, but I was fortunate to have reached the hospital, where the caregivers treated me as an emergency, and supervised my case for four days.” Khaled said.

The Corona pandemic has negatively affected the efforts to combat malaria undertaken by the Ministry of Public Health and Population through the National Malaria Control Program, in terms of delaying the arrival of medicines and control supplies, and thus delaying service provision, in addition to the forced suspension of program activities for long periods in 2020. The precautionary measures also reinforced residents’ fear of going to facilities and receiving health service.

“Tihama” region on the West Coast or what is known as the “Tihami Strip”, accounts for more than 80% of the disease burden, according to Director General of the National Malaria Control Program at the Ministry of Health in Sana’a, Dr. Mithaq Al-Sada.

It is a ratio closer to what was mentioned by the International Organization for Migration (IOM) in its statement that about 90 percent of malaria cases are found in the Tihama region, which is also known as the coastal plain of the Arabian Peninsula on the Red Sea.

Buthaina Hamid, 35 years old, is from Hajjah governorate – northwest of the capital Sana’a, which is “one of the Tihama areas”. Her condition worsened and was brought to a hospital in the city, where the doctors discovered that she was suffering from immune platelet breakdown due to a high temperature and a sharp drop in the level of platelets. The doctors decided to enter her in the inpatient department and she remained under observation for several days.

According to her uncle Radwan Hamid, she began receiving quinine treatment after doing multiple tests, including malaria, but her condition rapidly deteriorated and she suffered from disturbances of consciousness, and hours after being admitted to the intensive care room she died. The doctor “A. R.”, who supervised her case, confirmed that she had arrived at the hospital late in the disease, which claimed her life.

In turn, the specialist in internal medicine and infectious diseases, Dr. Ilham Ezzeddine, explained that some people who contract malaria show symptoms of shivering, chills, and sweating. She added that symptoms often begin within a few weeks after exposure to an infested mosquito, and some types of the parasite that cause malaria can remain dormant in the body for up to a year.

Dr. Ezzedine confirmed that the malaria transmission cycle is caused by a single-celled parasite of the genus Plasmodium.
The disease and its symptoms are transmitted by female mosquitoes, who carry spores of the malaria virus in their salivary glands. The parasite is transmitted to humans through mosquito bites, and living in mosquito-infested areas is the greatest risk factor for malaria infection.

According to Dr. Ezzeddine, infants, young children and the elderly are the most affected groups from malaria infection, in addition to travelers coming from areas where malaria is not common to areas where malaria is spread. So are pregnant women and fetuses, as malaria has serious complications that may lead to death, including cerebral malaria, when the blood cells full of parasites block the tiny blood vessels in the brain, causing swelling or damage to the brain, breathing problems, and organ failure.

Malaria may cause damage to the kidneys, liver, or spleen rupture, and may lead to a lack of red blood cells and low blood sugar, which can lead the patient into a coma or death.

To prevent malaria, Dr. Ezzeddine advised residents in malaria-prevalent areas to wear long-sleeved pants and shirts and put the bottom part of the shirt inside the pajamas and tuck its legs inside the socks, in addition to putting an insect repellent lotion on the skin, as well as sleeping under a “mosquito net”, especially those saturated with anti-insects such as “Permethrin”, noting that mosquitoes are more active from early evening until dawn.

Tihama is the most affected by malaria

Director General of the National Malaria Control Program at the Ministry of Health, Dr. Mithaq Al-Sada, explained that the average total number of cases reported through the epidemiological surveillance system during the last three years ranges from 150 to 160 thousand confirmed cases annually.

However, he said, “The limited facilities included in the system that report cases as the total number of annually estimated cases in Yemen may reach 700 thousand cases, according to the World Health Organization.”

In an exclusive statement to the Medical Journal, Dr. Al-Sada said, “The priority of the health system is to raise the sensitivity of the surveillance system to discover all cases and thus the ability to treat and gradually reduce them until eradication.”

He explained that the program, which has two axes in Tihama and Hadramout, branches in the governorates, and 38 malaria units, 15 of which are promoting the process of control, supply, supervision and removal of sources of mosquito breeding, provides medicines and testing supplies to health facilities to provide them free of charge to citizens and works on training health cadres to provide proper and rapid diagnosis and treatment services, as well as implementing control activities such as spraying the walls of homes with long-acting pesticides and distributing mosquito nets impregnated with the pesticide that kills the disease-transmitting mosquitoes.

Last August, the International Organization for Migration sent a chartered plane loaded with 8.9 tons of anti-malarial drugs to Sana’a International Airport to be distributed to about 2000 health centers across Yemen.