YPC calls on UN to return to Convention on Sea Law 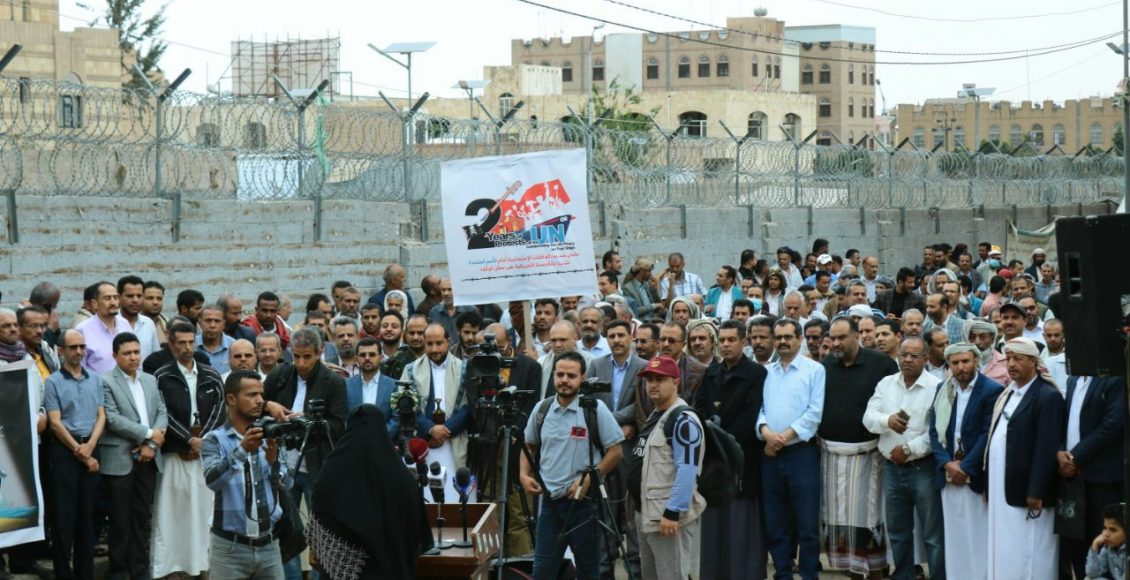 Al-Adra’i indicated during a protest organized by the employees of the Yemeni Oil Company in front of the United Nations office in Sana’a on Tuesday, that the United Nations has become an essential partner in the maritime piracy of fuel ships and that it violated the Convention on Law of the Sea.

Al-Adhra’i said that, “We call on the United Nations for more Once to returned to the Convention on the Law of the Sea, but it ignored those calls in full view of the world, and we did not see any international cooperation to break the blockade and stop the piracy carried out by the US-back Saudi-led aggression coalition and under the cover of the United Nations.

The Executive Director-General of the Yemeni Oil Company held the United Nations fully responsible for what happened to the situation in the Republic of Yemen and what it will lead to in the coming days due to the detention of oil derivative ships.

He pointed out that since the beginning of this year, no oil derivative vessel has been allowed to enter the port of Hodeidah, except for one diesel vessel for public consumption, which represents 6.5 percent of the actual need, indicating that the ships that are still detained at sea, the first of which exceeded the period of detention for nearly five months Late fines reached more than $ 155 million.

Al-Adhra’i pointed out that fuel ships are being detained to double the suffering of the Yemeni people, even though the United Nations ships are allowed to enter the port of Hodeidah.

Eng. Ammar Al-Adhra’i renewed the call of the free world, including journalists, and human rights activists to pressure the United Nations and the coalition of aggression to release fuel ships in order to avoid a humanitarian catastrophe as a result of the stopping of most service and vital sectors from providing their services to citizens.

A statement issued by the Trade Union Committee for the employees of the oil company demanded the United Nations to play its role in allowing entry of oil derivative ships and preventing a humanitarian catastrophe as a result of the suspension of vital and service sectors in Yemen.

The statement held the United Nations fully responsible for the worsening humanitarian conditions experienced by the Yemeni people in light of the continuing aggression and blockade, calling on the international community and the United Nations to quickly release all the detained ships and not to be exposed to them in the future.

Furthermore, the statement of the Yemeni Oil Company condemned the United Nations ’disregard regarding the detention of oil derivative ships by the aggression coalition, stressing adherence to the legitimate rights and the demand for the release of fuel ships.

One killed, 2 others injured in shooting in USA