Path towards peace is well known, does not need political maneuvers: FM 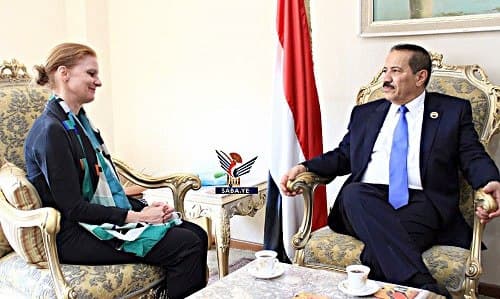 SANAA, April 06 (YPA) – Yemen’s Foreign Minister, Hisham Sharaf said that the path towards achieving peace is well-known and does not need the political maneuvers.

Sharaf affirmed that the peace also doesn’t need to advertisements in the international media outlets and regional forums, but rather requires confidence-building measures between the parties.

This came during his meeting on Tuesday with the Deputy Head of the United Nations Mission to Support the Hodeida Agreement (UNMHA), Daniela Crosslake.

The minister considered reopening of Sanaa International Airport to travelers and the payment of salaries for all state employees as a first step to carry out the confidence-building measures.

He stated the Saudi-led coalition countries are trying to put many obstacles and fabricate justifications for the continued suffering of the Yemenis.

The minister stated also the policy of collective punishment by the coalition against the Yemeni people, is a clear message to paralyze all forms of life in the provinces, which are under the authority of the Supreme Political Council and the National Salvation Government.