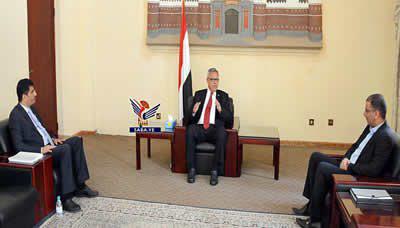 SANAA, June 23 (YPA) – Prime Minister Abdulaziz Saleh bin Habtour on Sunday stressed on the importance of combining the various governmental efforts and commitments about the semi-annual spending plan for 2019.

The move came during his meeting with the Minister of Finance Rashid Abu-Iahum, and Telecommunication Information Technology minister Mesfer al-Nimeer.

In the meeting, bin Habtoor stressed the importance of rationalizing spending in line of the current conditions experienced by the country because of the war and siege imposed by the Saudi-led aggression on Yemen.
During the meeting, the officials discussed a plan provided by the finance minister in preparing the spending plan for the current year.

The cabinet praised efforts made by the telecommunication ministry to confront the systematic sabotage operations and negative effect carried out by the aggression coalition and its tools to hit the vital sector.

#Breaking:# Saada: An elderly woman died from wounds sustained by a Saudi bombing on…