SANAA (Yemen Press Agency) – The Council of the General Investment Authority (GIA) approved, in its meeting on Saturday under the chairmanship of Prime Minister Dr. Abdul Aziz bin Habtoor, the draft regulations of the authority. 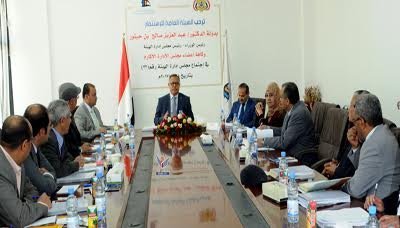 SANAA (Yemen Press Agency) – The Council of the General Investment Authority (GIA) approved, in its meeting on Saturday under the chairmanship of Prime Minister Dr. Abdul Aziz bin Habtoor, the draft regulations of the authority.The draft regulations, which consists of 52 articles, aims to organize the institutional work of the GIA to enable it to confirm its role in organizing and employing the Yemeni, Arab and international capitals within the state general policy and encouraging the private sector to set up joint investment projects in accordance with the legislations in force.

In its meeting, the council discussed the draft executive regulations of the Investment Law No. 15 of 2010, which has been submitted by President of the GIA and aims to facilitate and develop the investment through organizing and clarifying the rules governing the single window system being applied and run by the authority.

The council emphasized the importance of these rules to strengthen efforts to develop investment activity in its various kinds and multiple levels.

It also approved the authority’s plan for 2017, which has been prepared by the executive administration in the authority.

During the meeting, the prime minister underlined the importance of gathering efforts of the government and the private sector to overcome the current challenges and forming the best reality for the coming period.

“The aggression overdid in destroying installations and investment institutional projects which had required a great and sustained effort to be achieved over the past decades,” Dr. bin Habtoor said.

He directed the concerned ministers to work on supporting the private sector and facilitating procedures for investors, especially in the current extraordinary circumstances experienced by the country as a result of the aggression and siege.

The prime minister urged the private sector to sense its historical responsibility towards the situation experienced by the homeland and confirm its important role in alleviating the effects caused by the all-out siege and unjust aggression on the Yemeni people.