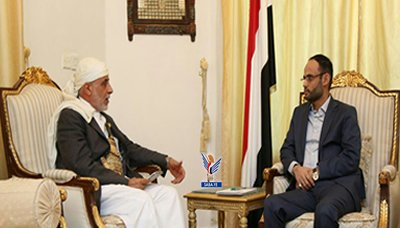 SANAA, July 9 (YPA) – President of the Supreme Political Council, Mahdi al-Mashat, on Monday praised the efforts made by the Ministry of Civil Service and Insurance to correct the public job status.

During his meeting with Deputy Minister of Civil Service and Insurance, Abdullah al-Moayad, the president stressed the importance of sensing responsibility by everyone, especially during the current stage the country is going through due to the continued aggression and siege.

The meeting discussed the mechanism of enhancing the discipline in the state institutions and ways to overcome the difficulties facing the ministry in the current conditions.

It touched on what has been done by the ministry with respect to the system of fingerprint and image, the reduction of job duplication, and procedures aimed at improving the performance in the public job.

Hodeida rallies to condemn continued crimes by coalition against civilians