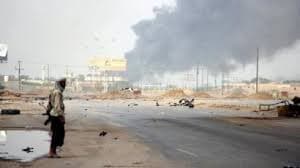 The coalition’s spy aircrafts waged 5 strikes on al-Faza and al-Tuhaita district and nearly 23 spy planes, including 2 fighter jets, flew over the areas of 50th Street, Hays, al-Jah, al-Jabaliya and al-Durayhimi, said an official in the operation room to monitor the aggression’s violations.

He added that the aggression forces carried out 209 artillery attacks and fired 462 live bullets.

Additionally, the coalition forces waged an attack, which was thwarted in Hays area, and several combat fortifications in Hays, al-Tuhaita, al-Jabaliya, and al-Jah.

Report: more than 2 million Yemeni children out of school due to aggression and siege

#Breaking: #Saada: A citizen was killed by #Saudi bombardments on border district of…

#Breaking: Intense flight of the coalition’s spy planes in airspace of the capital…

#Breaking: #Sanaa forces spokesman: The missile attack resulted in the death and…