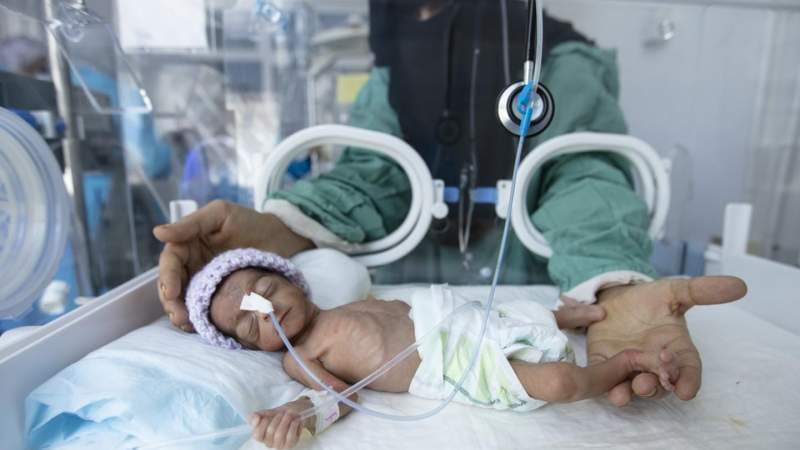 SANAA, Oct. 10 (YPA) –  Dr. Zainab Al-Badawi, Director-General of Reproductive Health at the Ministry of Public Health and Population said  on Saturday that Yemen is witnessing a record rise in the number of maternal and neonatal deaths, reaching nearly 500 deaths per 100,000 live births last year.

Al-Badawi explained that the lack of medicines, the destruction of medical facilities by the US-Saudi aggression and its cutting off of fuel, was one of the most important reasons for the high death rate among pregnant women and newborns.

The Director-General of the Al-Sabaeen Hospital for Maternity and Childhood, Dr. Magda Al-Khatib, indicated that the hospital is facing a significant shortfall in providing medicines for pregnant women and newborns, and the various maternity and childhood hospitals suffer from this problem.

Al-Khatib indicated that the hospital is forced to purchase some vital pharmaceutical items in a very small number due to the scarcity of their presence in the local market and the lack of drug supply stores in the Ministry of Health.

She noted that the nurseries at Al-Sabaeen Hospital do not remain empty for one hour due to the high turnout and the small number of nurseries in Yemen.

Dr. Magda Al-Khatib stressed that the United Nations organizations do not supply enough medicines for pregnant women and newborns, and their assistance is mostly limited to detergents.

She noted that “one of the most prominent sufferings of maternal and child hospitals in Yemen is the interruption of fuel due to the maritime piracy of the countries of the coalition of aggression on the port of Hodeidah.”

NCM expects scattered rains on most of Yemeni provinces

Old Sanaa threatened with collapse due to heavy rainfall