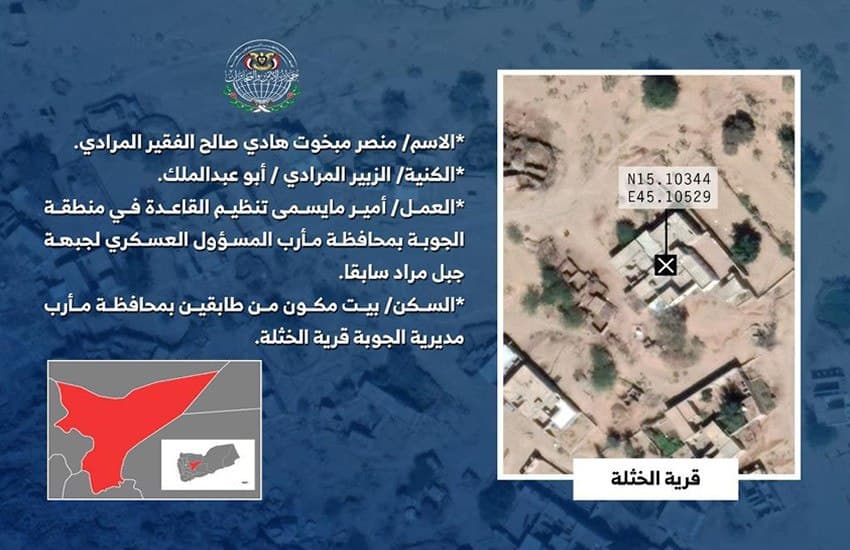 SANAA, Oct. 10 (YPA) – The Security and Intelligence Service in Sanaa revealed dangerous information about the emir of the so-called al-Qaeda organization in the al-Jouba district of Marib province.

In a statement, the Service affirmed that the al-Qaeda leader Munasir Mabkhout Hadi Saleh al-Faqir al-Muradi, who lives in al-Khathla village al-Juba district, the former military official in Jabal Murad Front, is one of the most important leaders of the organization in Marib, and one of experts in manufacturing improvised explosive devices of all kinds for al-Qaeda.

According to the information of the Security and Intelligence Service, Mohammed Hussein Dramah, the Sharia judge of Al-Qaeda, indicating that the house of Takfiri Munasir Al-Faqir is a safe place for holding private meetings frequented by Al-Qaeda leaders in Marib.

The statement revealed there is an integrated laboratory inside the house of Takfiri Munasir Al-Faqir for the manufacture of explosive devices and, in which a team of specialized experts, including Takfiris Hassan Al-Hadrami, Ahmed Zaki, Najm Al-Din Al-Tazi, Murad Al-Athal and his brother Abdul Qawi Al-Athal.

According to the statement, Munsir al-Faqir’s house, is considered one of the most important weapons stores for al-Qaeda.

It pointed out that many of the explosive devices were transferred by the organization’s leaders to southern and eastern provinces, including “Abyan and Hadramout, and were planted in separate areas in Serwah district of Marib.

Regarding the relationship of Takfiri Munasir al-Faqir with the Saudi-led coalition’s mercenaries, the statement stated that the engineering team and experts in the manufacture of improvised explosive devices in the Jabal Murad front consists of al-Qaeda members and some elements of the Islah party led and supervised by Takfiri Munasir al-Faqir, the senior leader of al-Qaeda.

The statement confirmed that the security and intelligence services will continue in support of the heroes of the army and popular forces in defeating the takfiri and al-Qaeda elements and aggression coalition and al-Qaeda criminal activities.

STC reveals party that stands behind Tawahi explosion in Aden

Saudi Aramco is the most polluting company on earth: “Forbes”