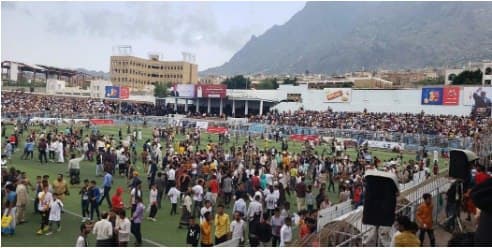 TAIZ, Sept. 24 (YPA) – Hundreds of citizens failed on Friday a football match in one of sports clubs in Taiz province.

A championship, which was titled under the name of the Emir of Qatar, Tamim bin Hamad, failed after the crowd’s chants that condemned the sports meeting and aimed at whitewashing the crimes of Islah in Taiz.

Although Hamoud Al-Mikhlafi, a leader of Islah, allocated five million riyals and cars by lot to the masses, the language of rejection outweighed the temptations of the Muslim Brotherhood-affiliated Islah militia in the province.

The Islah party is controlling over the city of Taiz and the southern parts of the province, which is the subject of discontent among the citizens because of what the citizens describe as the criminal approach represented by the killing, corruption and exclusion that the party has practiced against the sons of the province.