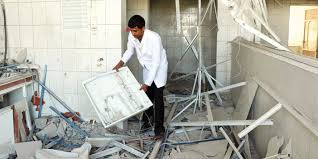 SANAA, April 02 (YPA) – The Ministry health said that the estimated losses  incurred by the health sector in Sanaa province as a result of the US-Saudi aggression over six years amounted to 2 billion and 340 million riyals.

A report issued by the provincial health office indicated that 27 hospitals, centers and health units have been totally or partially damaged by the bombing of the aggression’s warplanes. Some of them are suspended due to the economic situation of the country.

The report stated that the bombing of the aggression’s warplanes caused damage and destruction of three ambulances, causing them to be completely out of service.

In addition, severe damage occurred to the buildings and equipment of hospitals and branches of the Health office in a number of the province’s districts.

The director of the province’s Public Health and Population Office, Dr. Khaled Al-Muntasir, affirmed that targeting the health sector is war crimes against humanity and a flagrant violation of international norms and laws.