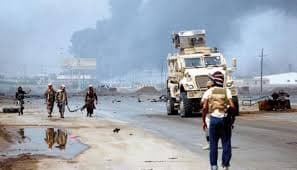 The coalition’s spy planes waged a strike on al-Durayhimi district and nearly 16 spy planes flew over the areas of al-Jabaliya, al-Tuhaita and al-Durayhimi, Hays and Kilo 16, said an official in the operation room to monitor the aggression’s violations.

The official added that the coalition forces carried out 34 artillery attacks and fired 250 live bullets.

Additional, the violations included the creation of combat fortifications by the coalition near 50th Street and al-Jabaliya, and an attempt to infiltrate towards Hays.