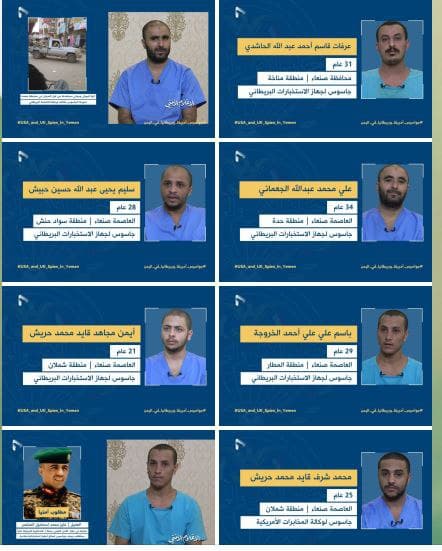 SANAA, Feb. 23 (YPA) – The Yemeni Security Intelligence Service (YSIS) revealed on Tuesday in Sanaa new information about British and US intelligence spies arrested in the capital Sanaa in last week.

The statement pointed out that the arrested spies met with the CIA’s officers at al-Ghaydha airport in al-Mahra province, east of Yemen, and then worked with British intelligence officers.

The statement affirmed that the and British and US intelligence officers were paying the sum estimated at $300, to the arrested spies for collecting important information and coordinates in the Yemeni army-controlled areas in the northern provinces.

It explained the members of the spy cell joined the so-called Special Missions Battalion, which was led by Fayez Al-Muntasir, and took a military course, noting that the Battalion was established to attract the youth from the northern provinces to work with the British and American intelligence in Yemen.

“The US and British intelligence, and the Saudi-led coalition countries were focusing and the on the northern provinces, especially Saada and Sanaa,” it added.

The statement indicated that the spy cell concentrated on searching for air defenses and drones of the Yemeni army, in addition to the military forces, in an attempt to destroy them.

“The American and British intelligence are working in anywhere in Yemen to establish a permanent presence under the pretext of combating terrorism and building what has been destroyed by the coalition airstrikes,” the statement said.

Foreign Minister calls on coalition to stop its interference in Yemen