Millions of Yemenis protest against US terrorism, aggression on Yemen 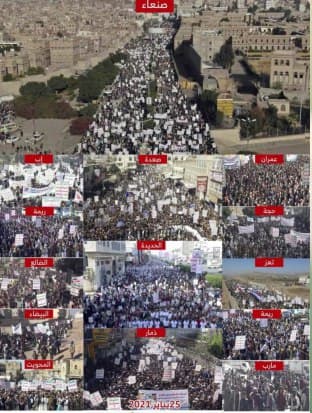 SANAA, Jan. 26 (YPA) – Massive rallies have been held all over Yemen rejecting the US and Saudi terrorism, blockade and the crimes committed by the Saudi-led coalition against innocent civilians.

On Monday, millions of the Yemeni people from all over the country flocked into 24 squares across 12 provinces to take part in the protests titled “The American siege and aggression are terrorist crimes”.

The protesters chanted slogans and raised banners condemning the US policies and terrorism against the Yemeni people, and rejected the hegemony of the global arrogance forces.

They emphasised that the US is the “mother of terrorism and the main supporter for it in many countries of the world,” pointing out that the coalition of aggression against Yemen enjoys the care and support of the United States of America.

During the mass rally in the capital Sana’a, a statement was issued by the protesters.

They confirmed that the brutal aggression and the unjust siege on the Yemeni people is primarily American, since the aggression was announced in Washington on March 26, 2015.

In the statement, they  indicated that the US is “committing genocide against the Yemeni people, and killing children and women in markets, weddings and mourning halls with American bombs and weapons. It is the US who provides support and political cover for this aggression.

“This ridiculous American designation issued by the Trump administration that has gone away along with with its ugliness and crimes, will not prevent the Yemeni people from continuing their sacred national battle and their duty of Jihad to defeat the aggression coalition and its mercenaries,” the statement read.

The statement considered that the era of foreign colonial tutelage over Yemen has passed, and praised the great sacrifices of the heroes of the army and the Popular Committees in the face of aggression and siege.