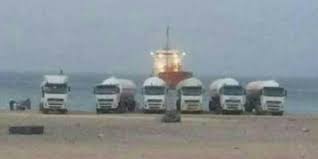 The center revealed, in a statement issued on Monday, that the Islah Party is using the port of Bir Ali in Shabwa to smuggle large oil shipments with the aim of managing the black market and withdrawing currency in several provinces.

The port of Bir Ali receives a ship or two a week carrying more than 40 thousand tons of oil and diesel, and the Islah sells them at double their price, taking advantage of the people’s need for fuel, the statement explained.

The smuggling operations are carried out with the protection of the Saudi-led coalition’s followers, represented by General Ali Mohsin Al-Ahmar and the oil merchant Ahmed Al-Eisi, according to the statement.

“The petroleum products smuggled through the port of Bir Ali in Shabwa are not subject to any official procedures in terms of specifications and standards,” the center said.

The center added that the Islah militia uses ‘Al-Nushimah’ port to smuggle the crude oil and uses the port of Bir Ali to receive the smuggled petroleum products shipments.

#Breaking: 3 soldiers of Hadi’s forces were killed in an explosive device blast in #Marib