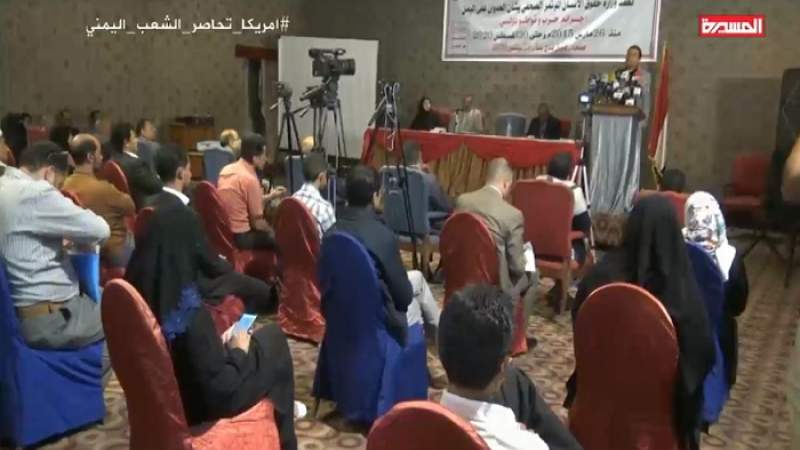 SANAA, Sept. 23 (YPA) – Ministry of Human Rights revealed on Wednesday shocking numbers of the civilian victims as a result of the US-Saudi aggression during 2000 days.

During a press conference, held in the capital, Sanaa, the Ministry of Human Rights confirmed that the Saudi-led aggression has killed 16,771 civilians and injured 26,359 others,

The ministry indicated, in its official report, that 5,345 of the killed are women.

The report indicated that the aggression killed 3,747 children and injured over 4 thousand others during the 2000 days.

It said that more than 4 million and 147 thousand Yemenis displaced as a result of the bombing that targeted all Yemeni lands.

The Ministry of Human Rights confirmed that the coalition launched thousands of military attacks against civilian targets that are covered by international protection.

The Ministry’s report included statistics of civilian facilities that are destroyed by the aggression, including over 47 media institutions, over 28 radio and television centers, over 41 judicial courts, 131 sports facilities, 364 tourist facilities and 2023 various service facilities, as well as it destroyed 1,324 mosques and 417 archaeological sites and historical monuments.

Regarding targeting the health and education facilities, the Ministry reported that the aggression has destroyed 486 hospitals and health facilities, targeting 92 ambulances, and destroying two oxygen plants. It also destroyed over 3722 educational facilities, and about 4 million and 435 thousand students lost their right to education.

In the field of service, industrial, commercial and agricultural facilities, the Ministry reported that the aggression targeted 14 seaports and 9 civil airports, and the burnt 4 civilian aircraft.

The Ministry of Human Rights confirmed that it was monitored the use of banned weapons and cluster and thermobaric bombs by the aggression on a large scale.

It pointed to the aggression and mercenaries kidnapped and arrested more than 1,000 civilians in the occupied areas, and the aggression coalition forcibly disappeared hundreds of civilians, activists and human rights defenders that opposed the war on Yemen.

On the economic damage, the Ministry of Human Rights confirmed that due to the aggression and siege, 24 million and 300 thousand Yemenis are in need of aids, and 7.27 million need shelter.

It explained that over 60% of Yemenis are suffering starvation, noting that the poverty rate has risen to 85% and the unemployment rate to 65%, noting that 1.25 million government employees have been deprived of their salaries.

The report indicated that 350 thousand patients were prevented from traveling for treatment, 42 thousand of them died, due to the closure of Sanaa airport.