According to the sources, an unknown gunman fired at the director of al-Maala directorate, Fahad al-Mashbaq, from one corner of the Hotel “Al-Ma’ala Plaza”.

The al-Mashbaq was with a number of his companions in the hotel, one of the sources said, adding that one of the companions was wounded.

Surveillance cameras at a hotel have documented the assassination attempt that targets the  local official inside the hotel. 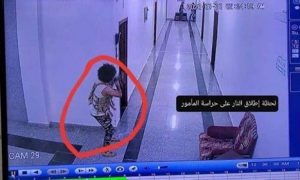 The footage showed an armed young man wearing military trousers pointing a gun at the man and his companions.

According to the source, the attempt came after a dispute between the gunman and the director of al-Ma’ala after the latter demolished an illegal building built by the gunman in a street of the directorate.