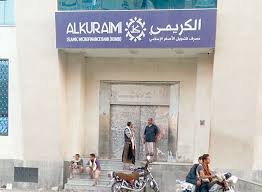 TAIZ, July 13 (YPA) – Islah Party’s militias on Monday stormed Al-Kuraimi Bank in Taiz city, southwest Yemen, and closed it on the pretext of not paying salaries of recruits loyal to Saudi-led coalition in Taiz province.

“Khaled Fadel, an Islah leading member and commander of the so-called Taiz military axis, directed his forces to storm and close the Al-Kuraimi Bank to force it to pay salaries of the coalition’s recruits in Taiz,” Yemeni News Portal website quoted local sources as saying.

Al-Kuraimi Bank told the Islah militias that the funds of salaries had not been transferred by “Hadi’s government”, and that the bank is only a mediator and does not bear any responsibility for the delay, the sources explained.

However, Fadel ordered the storming and closure of the bank, as part of the policy of blackmail practiced by the Islah militia to blackmail merchants in the city of Taiz.

The sources pointed out that the closure of Al- Kuraimi Bank in the city of Taiz resulted in depriving many citizens of receiving their money transfers.