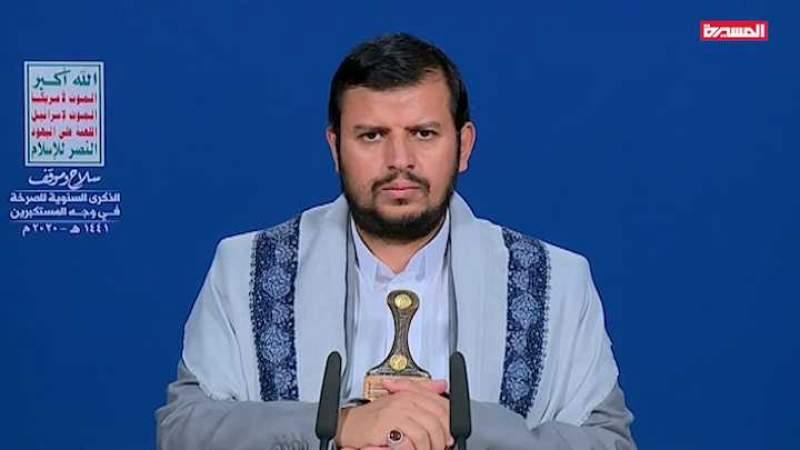 SANAA, June 18 (YPA) – Leader of the Revolution, Sayyed Abdul-Malik Badreddin al-Houthi, has stated on Thursday that al-Sarkha (The Scream), as the official slogan of the Ansarullah movement became the title of an awareness and enlightenment project to counter the American and Israeli attack.

The chant of freedom Disownment of announced by Sayyid Hussein on the last Thursday of Shawal in 1422 Ah, four months after the events of September 11th,  made as a practical shift from irresponsibility to the state of dealing in a responsible and Qur’anic spirit, said Sayyed Abdul-Malik al-Houthi in a televised speech aired by Al-Masirah Channel on the occasion of the annual anniversary of the launch of al-Sarkha.

Sayyed confirmed that “The Qur’anic project and Al-Sarkha [were started] in the face of the arrogant powers, (The US, Israel and their allies), adding that the slogan as a position and project addressed threats and dangers to our Islamic nation from within.

Abdul-Malik said that the United States moved certain currents and parties to oppose the project at that time, adding that our priority should be to address the American and Israeli threat did not draw priorities that serve America and the Jewish lobby and at the very least do not constitute an obstacle to their conspiracies.

He pointed out that the annoyance of enemies of the slogan was early expressed by the American ambassador at the time and prompted the authority to take hostile positions against Ansarullah, stressing that the facts from the launch of the Slogan today prove the importance of the position in the face of the American and Israeli danger in all its methods.

Sayyed al-Houthi explained that the American intervention in the various countries of our Islamic world is hostile and negative that creates crises and exploits problems.

The US’s targeting of our nation is a diversity between economic, military and security at all levels, pointing out that what happened in Afghanistan and Iraq was not a passing movement but was in the path of targeting the whole nation, and this proves the correctness of reading of events.

He went on to say that the loyalists of America and Israel have become more and more exposed, and today they are showing up in their relationship with Israel more than ever before,

Who would have expected the Saudi, Emirati and other regimes to show their relationship with Israel to the point where the Palestinian resistance would be classified as terrorism? He asked.

Sayyed added: “Who would have imagined that the Palestinian would be a prisoner of the Saudi regime for its hostility to Israel!!?

“In the coming days there will be a day when the American and Israeli and their agents will move militarily jointly and apparently, but in secret they do so,” He said.

He attacked who spoke with affection and love about the Jews and Zionists of the Saudi regime, saying: They are idiots. They do not realize that no matter how much they express their loyalty, they will only be met with exploitation, ridicule and contempt.

Moreover, He stated that those who provided justifications for the relationship and alliance with the Israelis would become more and more exposed and would reach the stage of remorse.

Leader of the revolution stressed that the position independent of American hegemony showed its effectiveness among the nation, added: The American influence in the country has shrunk when the Qur’anic project reached Sana’a and other provinces, did not the American ambassador and marines escape from Sana’a? he asked.

He noted that when the Americans were expelled and their influence in Yemen severed, they turned to another plan, which is to manage the aggression directly.”

“We are not afraid of the Americans and we were hoping that the Saudi regime, the UAE and the traitors would leave America to come down to the field of confrontation” he said, stressing that the American continues its plans, although it is dependent on its tools and mercenaries in various aspects.

Regarding the US and Israeli destructive role in Lebanon, Sayyed al-Houthi said this role is manifested in its economic targeting after they failed militarily and politically to target Hezbollah, stressing that the enemies will fail in the economic conspiracy against the Lebanese people.

He added that those loyal to the US in Lebanon are the ones who stand in the way of adopting the right economic policies to alleviate the suffering of the Lebanese people.

Leader of the revolution pointed out that the suffering in the Muslim world is due to American actions and its allies in their countries.

“We are on a path that has been rewarded by victory and we have a lot of awareness and responsibility in all tracks,” he added.

He concluded saying that ” We have no political affiliation with any party and what unites us with the free people of the nation is the one and common destiny, and we continue to confront the aggression by relying on God and I urge all the people of the country to intensify their efforts at all levels.