Official Spokesman for Ansarullah confirms association of war on Yemen with al-Quds, reveals secrets of consultations 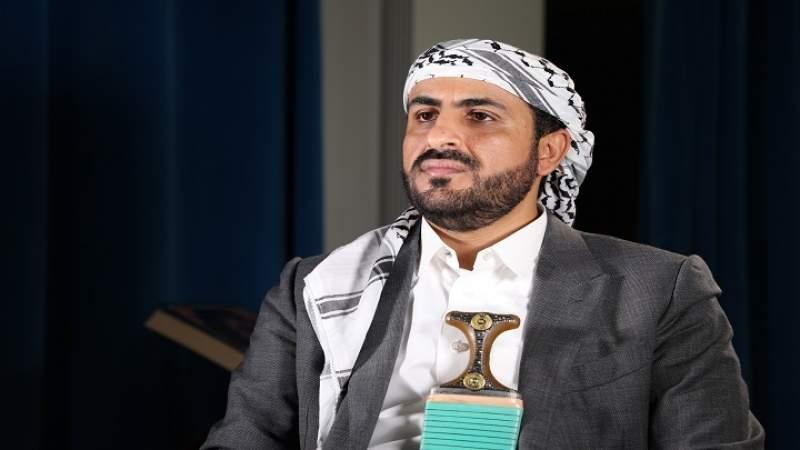 SANAA, May 20 (YPA) – Official Spokesman for Ansarullah and the head of the National Delegation, Mohammed Abdulsalam, confirmed that Sayyed Abdulmalik al-Houthi is monitoring the situation of Palestinian detainees, from the resistance movement, Hamas, in Saudi Arabia.

He explained that the delay in implementing the initiative of Sayyed Abdulmalik is due to the Saudi side not responding.

“The delay in implementing the initiative of Sayyed Abdulmalik al-Houthi regarding the offer to release Saudi pilots in exchange for members of Hamas being held in Saudi Arabia is due to the Saudi side lack of response,” Abdulsalam said during an exclusive interview on Almasirah Channel.

“We are open to any discussion leading to their release,” he added.

He stressed that Palestine is not for bidding and whoever stands with it pays blood and offers martyrs, stressing that part of the reasons for the Saudi-led aggression against Yemen is Yemen’s independent stance on the Islamic Nations’ issues.

Abdulsalam went on saying, “All Israeli deals are unable to end the issue of Palestine. Israel is still the first enemy of the Islamic Nation,” noting that “there Saudi Arabia is lacking any plan strategy except giving in the Islamic Nation on a plate of gold to serve America and Israel.”

Ansarullah spokesman encouraged the axis of the resistance line up at all levels to confront the enemies, noting that the war on Yemen, Syria and Iraq, as well as the assassination of Haj Qassem Soleimani and the sanctions against Iran is only for the honorable attitudes towards the central Islamic Nation issues.

“Yemenis are ahead in the stance and action,” he said, referring to Yemen’s stance towards Palestine. “The boycott of Israeli goods is in place more than others in addition to the cultural mobilization against the Israeli enemy.”

He also affirmed that the Israeli participation in raids and logistical support in the aggression against Yemen has become known and that Israeli intelligence operates on that.

Regarding Saudi Arabia’s declared ceasefire, Abdulsalam said it is “a lie confirmed by the unceasing war, which, the announced truce, is a way to absorb the disaffected international position from its failure.”

“Our discussions with the United Nations are continuing, they want a temporary cease-fire, while keeping our skies open to hostile aircrafts,” he said. “The United Nations expresses the American and British position, so they ignore the contents of any titles such as opening airports and ports and lifting the siege by talking about measures.”

He Continued: “The first step to be taken, from the humanitarian situation in Yemen because of COVID-19, is the opening of airports to aid before talking about a ceasefire,” noting that the calls for a cease-fire are not serious.

“We do not reject honorable peace,” he affirmed. “If they offer a peace that is translated by stopping the Saudi-led aggression and lifting the siege, then we are ready for peace.”

Abdulsalam warned the coalition of aggression that the economic blockade will not continue without a response. “What goes around comes around,” he added.

He demanded allowing humanitarian aid provided by states and systems to Sanaa, and the lifting of the siege on Ad-Durayhimi City in Hodeidah province.

“The coalition of aggression prevents the entry of aid provided by more than one country to Sanaa,” he said.

The official spokesman requested the United Nations to return the stranded and wounded from Muscat, noting that “taking them out and bringing them in was in the agreement with the UN.”

Abdulsalam pointed out that the salary dossier is being circumvented by the United Nations, “We demanded that the central revenues as oil and gas be in favor of salaries, but they refused.”

At the end of the interview, he stressed Yemen’s refusal to surrender to the coalition led by Saudi Arabia and the United Arab Emirates with direct US and British support since five years.

Yemen, with its steadfastness for the sixth year, presented an honorable model in front of the US-Saudi aggression. “Yemen is living in a difficult and bad situation,” but he called “the great people of Yemen for more steadfastness,” he concluded.