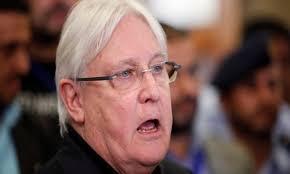 SANAA, March 25 (YPA) – The UN envoy for Yemen Martin Griffiths on Wednesday called on all Yemenis to unite theirs efforts to confront Coronavirus.

Griffiths urged on his Twitter account the Yemeni parties to pay heed to the United Nations Secretary-General’s call to reduce the escalation of violence and work together to protect the Yemeni people.

Griffiths added, “The battlefields are tearing Yemen, and it is time to work now to stop the conflict for confronting the Corona virus that reaches country after country fast.

Earlier in the day, the Secretary-General António Guterres on Wednesday called on all parties in Yemen to immediately stop the fighting and to focus on a political settlement through negotiation to face the epidemic.

Guterres called in his speech the warning parties to exert efforts with Griffiths in order to reach de-escalation at the country level for achieving progress in economic and humanitarian measures alleviate the suffering of citizens.

The Secretary-General of UN considered that a political solution between all parties is the only way to achieve a comprehensive and sustainable solution in Yemen.

Meanwhile, the Supreme Political Council’s member, Mohammad Ali al-Houthi, welcomed in a tweet the Secretary-General of the United Nations’ call for a cease-fire in the world, and a focus on fighting the Corona virus.

“We welcome the Secretary-General of the United Nations’ call and called on the US-backed Saudi-UAE coalition and its allies to stop its aggression on the Yemeni people,” al-Houthi said.